Can I get a hey? a hip-hip-hooray? a WHEW! (Brigitta is on the loose)

At long last… no seriously…loooooong laaaaaast… I just handed (okay, I e-mailed) the FINAL DRAFT of my accidental novel Brigitta of the White Forest to my copy editor. It’s officially out of my hands.

Do you even know how unreal it was to let it go?

This story began in late 2002 when I was visiting my brother’s partner in her most-awesome store EARTH CENTRAL. A cavern of magical items, books, tarot cards, and piles of faerie-like clothing. I was tending her store and pondering something my EX-screenwriting agent had said to me after reading my 3rd dark, dysfunctional, indie dramedy.

Danika, could you please write something BIGGER?

Bigger I thought… something more mainstream… something with merchandising potential, perhaps… all of this stewing in my brain while being surrounded by FAERIES!

Lady Luna on her Doorstep

You can say inspired, kissed by a muse, or downloaded – but the idea for the story was simply suddenly there. I could picture the two faerie sisters in my mind. So, I let the story percolate, my usual mode of development for a new idea. My mind just plays with it, tosses it around, pokes at it, and asks it a few what if questions.

And then, fortune of fortunes, the next summer I was hired to work on set on the magnificent Sunshine Coast. If faeries live anywhere, they live near skookumchuck narrows on the Sunshine Coast. I knew it was the perfect opportunity to write the story. I made my goal to finish it by the end of the gig… four weeks. 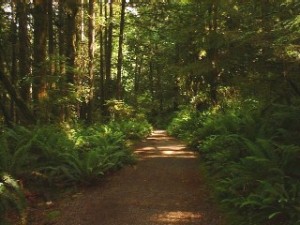 I did just that and even met some fabulous hippies with an old VW van (painted with faeries, of course) and told them the whole story. My first audience.

That was when the screenplay Brigitta of the White Forest was born. Since I had created an entire world with its own rules, magic, flora, and fauna I decided before I wrote another draft I had to figure out how this world worked. I wrote a 25 page world book and glossary for my own reference and 4 more drafts of the screenplay over the next two years.

In 2005 I got a call from an agent in Vancouver who loved Brigitta and wanted to market the script. I was thrilled, of course.

But it was still not a novel. It wasn’t even an idea for a novel. It was a mainstream, big-budget, family film with merchandising potential. It was a SO THERE to my EX-agents who complained that i didn’t write BIG enough…

Filed under behind the scenes, Brigitta of the White Forest, novel adventures, screenwriting