I was recently watching an interview with Lou Reed on Spectacle – the Elvis Costello show (a brilliant tv show, btw, if you’ve never seen it).

Lou Reed told Elvis that he’s not a prolific writer. That he doesn’t have a novel in him. That he writes when he’s in the grip of “it” but that it comes and goes. He has had long periods of not writing. Lou Reed.

When asked if during those dry times he ever thought he’d never get “it” back, he said as he’s gotten older, he’s learned that it always eventually comes back. So he doesn’t torture himself about it. Although, he said, he sometimes still asks the universe (my interpretation, he looked up at “the above” when he said this), “So . . . is that it?”

This was a timely message for me, as I’ve been in the middle of a, “So . . . is that it?” for the past month. If Lou Reed can be cool about those longer-than-comfortable creative silences, well then . . .

What I’ve learned for myself, when I’ve left the flow for an extended period of time, is that I’ve got to just be with it for a little while. It’s like sitting and watching a stream go by that has priceless treasures floating in it – and being OKAY that priceless treasures are floating by! Being OKAY with just sitting, because the treasure stream is always there.

Then, at some point in a day where I feel slightly more capable, I reach out after “it.” Even if it’s a weak grasping after, it’s a trigger, and sometimes it’s all the trigger I need.

Something I used to do several years ago, something I’ve always enjoyed and admired, is collage art. Words, images, or both. I’ve never done them to make a living or put in a show. I’ve only made them for friends – sometimes framed, sometimes sent as postcards.

I love the act of collage and the originality of it. It’s like thrift shopping for a new wardrobe – you can get an idea in your mind of what you want to create, but you only have the images you come across to work with.

This time, I decided to do a few holiday-themed pieces and use old photographs. I’ve got boxes of photographs I never look at, so it was the perfect kind of activity for a dark, cloudy, Vancouver December. 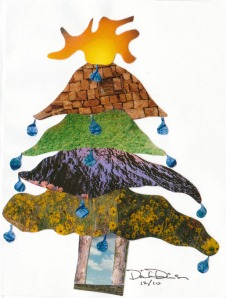 I liked these two so much they became my holiday cards for 2010.

If you’ve found yourself in a writing black hole, why not pull out some finger paints, coloured sand, or old photographs and try your hand at something else? Surprise your muse.

6 responses to “Backing Into the Flow [unclogging writer’s block]”