Middle Grade Mondays: The One and Only Ivan

(I just realized this is my first post of the New Year. So, Happy New Year!)

At the end of the year I was cruising through several “Best of 2012 Middle Grade Reading” lists and I would say that the most common denominator among them was this book: 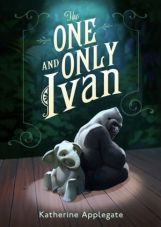 I really don’t need to sing its praises to you. If you spend any time in the blog-o-sphere looking for middle grade reading material, you came across this title.

It’s not marketed that way as far as I can tell, but visually it does appear like a novel in verse, the rhythms of Applegate’s language sometimes come across as poetry, and at the very end of the book there are a few pages of what looks to be genuine poetry.

(sample from page 2 of book)

Personally, I wouldn’t have put this book at the top of my general MG 2012 list, but before anyone boos me off my own blog, that’s only because this book is geared younger than the MG books I generally read and enjoy.

I would definitely put it on top in terms of the lower MG range.

Based on a true story about a gorilla that spent 27 years in a tiny cage in a shopping mall before public outcry got the gorilla moved to the Atlanta Zoo, the premise was enough to break my heart. I tend to be quite sensitive when it comes to the treatment of animals, as are most children. (Don’t worry, the true story and this one both have a happy ending).  Kids will also love that the real gorilla and the fictional one both like to draw.

In the book, Ivan lives at the Exit 8 Big Top Mall and Video Arcade and vaguely recalls life in the jungle. His old life doesn’t haunt him much, instead he thinks about TV shows, talks with his friends Stella, an elderly (and injured) elephant, and Bob, a stray dog who sleeps on his chest, and tries to figure out how to capture the things around him in his drawings. To save their dying attraction, their keeper adopts Ruby, a baby elephant taken from her family, and through her innocence and loss, Ivan see their home—and his art—through new eyes. Ivan vows to make life better for Ruby.

Kids will love the animal perspective, told with subtle gorilla humor, and I think it would be a great book for 3rd-5th graders to have discussions about endangered species or our human responsibilities on the planet when it comes to the other beasts who live here.

Applegate does have a talent for treating complex emotions with a verbal simplicity that will appeal to both children and adults. Adult readers will also appreciate her subtext. She manages a restrained tone of fear underneath Ivan’s child-like voice. I personally enjoyed his dead pan humor.

If you haven’t picked this one up yet, and you enjoy the kind of profound simplicity only a middle grade book of this quality can provide, I highly recommend it.

2 responses to “Middle Grade Mondays: The One and Only Ivan”