Last week we wrapped on Hit n Strum… for the most part. There are still a few minor scenes that need picking up, but for the majority of our team, it’s time to move on. Other gigs are calling, our spouses and loved ones want to see us, and the volunteer members of the crew are down to their last boxes of cereal.

I have to say this was one of the best things I have ever done in my life and I can’t wait to see how it all comes together in the editing room. Half scripted, half spontaneous guerrilla shoot, and all magic.

See the older couple on the far left? Those are the director’s parents. His Dad drove the cast and crew around. And his mom (in the sunglasses) made the crew breakfast every morning during the shoot. I’m gonna miss her.

Oh, and that’s their CAR… the one we used in our stunt. They were pretty good sports.

Reporter Glen Schaefer from the Vancouver Province was there on Stunt Day. CLICK HERE for the great article he wrote about our shoot. Very nice spread.

In addition to getting back to editing my latest feature script, I’m the Program Director for PitchMarket 2010, a professional networking and pitching event happening here in Vancouver on March 6th and 7th. CHECK IT OUT! It’s going to be great. Register now, cuz the first 50 registrants get extra special bonuses you won’t want to miss.

The Vancouver Province featured a nice spread on Hit n Strum, which has just completed day 19 of 24 of principal photography.  Last week was a big week for us, because it was stunt week. The Province’s Glen Schaefer was there to observe, so click the link above if you’d like to read more about that. All I can say was that I was very proud of our team that day.

Much of our film has been guerrilla-style on the streets of Vancouver, primarily Gastown. One of our more glamorous locations has been the lovely Georgia Viaduct. 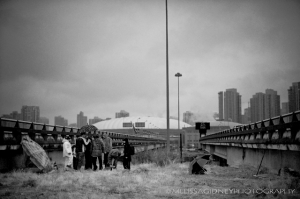 While location scouting, the director and DOP found a make-shift “condo” there and decided this would be the place our leading man would call home. 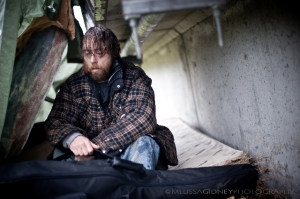 Our leading man, sick in a rainstorm. Art imitating life.

I’m the one who does all the scheduling… and we needed one day of rain to do our rainy day scenes. This is me feeling pretty smug about arranging that… if you schedule it, it will come… lol.

Filed under behind the scenes, film biz

Oh where, oh where, has Danika been??

About a month ago I “accidentally” became the 1st A.D. on a low budget indie feature film.  If you know anything about feature film-making, then you know I have not had any life outside of the film since then. It means 14-16 (even a few 18 )hour days and that my “day off” is never really a day off.

Being a low-budget indie also means we have no 2nd, 3rd, or 4th AD’s… so I’m it in the AD department. It means being the contact person on and off set, creating the shooting schedule, call sheets, keeping everything moving on set, and being the director’s right hand woman.

I’m having the time of my life. I’m exhausted a lot of the time, but not stressed, because behind it all is the thrill of doing something that I absolutely love. It’s chaotic and magical at the same time. It’s also extremely collaborative due to the nature of the shoot. This is why I like indie filmmaking… it tends to be less hierarchical and people tend to take on multiple roles.

This is the first time I’ve been this hands-on in the creation of a feature film. It’s better than any film-making program I could have attended.

I have never been any level of AD on a feature film. The reason I can do this job is because I have been on set in many capacities and I used to produce events for a living. During the events I was always the only person who knew what was going on in all departments, what was going on behind and in front of the scenes, and I acted as the point person for everyone.

The film is a little gem, too. A great crew, a great cast, a great story. There is a musical aspect to the film and the songs are quite lovely. A sort of Cat Stevens feel to them. I know the CD will be beautiful.

The guerrilla aspect to our filming creates a bond that one might not get on another set.

Pieter Stathis (DOP) and Me (AD)

Training for the CyberSpace Open: A script per day!

When I started my 10 day screenwriting challenge the other day, little did I realize how this might get me in shape for one of the most interesting screenwriting contests I’ve seen:  Screenwriting Expo’s CyberSpace Open.

The contest is set up in round-robin (elimination) style. Each round the participants must write a five page short script around a specific premise. You can write from anywhere. To win you need to survive 3 rounds, each with a tighter deadline than the last.

In the final round, the top 10 writers have only 90 minutes to write a 5-page script. Whew!

I’ve been writing a short script per day for the past 7 days. I missed one day, so I only have 6 scripts. I was hoping to write 2 today, but I don’t think that’s going to happen.

I may actually keep doing it for 2 weeks. We’ll see if I run out of steam.

If you haven’t heard yet, screenwriting guru Blake Snyder died of a heart attack yesterday. He was best known for his Save the Cat books and workshops.

The news is so strange to me, so unexpected. First of all, he was still pretty young. I have many friends around his age. But also, he has been so present in conversations lately. I just saw him at the PitchFest in L.A. and we were talking about brining him up to Vancouver for PitchMarket. He was one of the most popular screenwriting teachers out there.

I had some personal differences with some of the things in he said in his book, but he had some excellent pre-writing and writing exercises. He also inspired thousands of writers and not many out there can say that. He was also a genuinely nice man.

Someone on his website commented that they would dive with renewed passion into their own scripts in his honour. I will do the same. Here’s to you, Blake!

Best wishes to his family and friends. Losing a loved one is never easy.

I’ve been over at the OTHER wordpress (.org) for the past few days — the one that allows you to keep your own url and has more bells and whistles. What fun. (You can also screw up your site easier because it gives you access to the code — whoops!)

Now… back to that rewrite… 🙂

A great article on INKTIP (a great resource for screenwriters):