Brigitta is on the Loose (or, the History of the Accidental Novel) – Part Two

I am not ashamed to admit that the original Brigitta of the White Forest screenplay was written for the purpose of making money. I had made the decision that writing was not a hobby and that if I didn’t start making a living from it sooner rather than later, I was going to get seriously depressed. Since my dark indie dramadies weren’t pulling in the dough, I figured if I wrote something totally commercial, simply to sell and get back to my passion (i.e. dramas with dark comedic elements), I could support myself doing what I love to do. Plenty of artists did commercial work to support their other projects, right?

The problem came when I fell in love with my creation. I spent one too many moonbeats (a measure of time in my imaginary world) hanging out with Brigitta and her sister Himalette and creating an entire faerie history. I grew very attached to it and had strong feelings about the way I wanted it to be produced.

I was positive it had to be a live-action film ala Chronicles of Narina… which I knew was a hideously expensive proposition for an unknown property (as opposed to a KNOWN property like Chronicles of Narnia).  I had also worked so hard to create this world and wanted to explore it some more! When a company became interested in the script, my agent told me they would probably want the entire rights to it. The whole thing. Which meant good-bye to any plans I had for it. When that same interested company started talking about it being an animated film, I decided it was time to rethink how I wanted to release Brigitta into the world.

As I mention in my About section, a screenwriter friend of mine had adapted one of her original screenplays into a novel. The novel was published, which ironically got the screenplay optioned. I asked if she would consider adapting my screenplay into a novel. She told me to take a year off and write it myself.

But I’m not a novelist, I said.

Neither was I, she responded.

I took a year off of screenwriting and birthed the novel version of Brigitta of the White Forest. I took another year and wrote a few more drafts. The story got deeper and darker and my imaginary world got richer. I realized I really liked writing novels and that this imaginary world had many more stories that needed telling.

I started sending out my agent queries and that’s when things got wonky. I was taken on by a fabulous agency in the UK, Brubaker and Ford. Two gregarious and generous men run that boutique agency, and I was in writer heaven with the amount of affection they poured forth. They left voicemail messages sending love and praising my work. I saw success right around the corner! This was it!

Only the book wouldn’t sell. We were told the fantasy market was oversaturated. We were told the economy was uncertain. We were told new technologies were changing the book industry. We were told nobody was taking financial risks with new authors. Nobody said they didn’t like the story. Most of them praised the writing. I was so confounded that I was literally pulling my hair out (see trichotillomania) – luckily, I have a lot of hair.

After a year of approaching all the big houses and it not selling, we parted ways, as much as it broke our hearts. I decided to do one more rewrite to get rid of a bit of the exposition, and then run it through a focus group of teenagers to see if I was crazy thinking this thing was any good! B & F had suggested I find another agent and submit the new version back to the same big houses under another title. I started querying again, but my heart wasn’t in it. I got one offer for representation and I turned it down b/c it just didn’t feel like the right fit.

I decided the hell with agents and big publishing houses. Did I really want to wait three more years for this book to come out? I had already drafted the sequel! I was ready to take the show on the road! I approached a few boutique publishers and Tod McCoy of en theos press (who has published my books of poetry in the past) decided it was just the new direction he wanted to take his small press. Not only is this a person I trust, I was going to be involved in the whole process, something that doesn’t happen with a larger publisher. This made the control freak side of myself very happy indeed.

Another rewrite later and I was in much better spirits. I was actually THANKING the universe that the previous version of my novel wasn’t published because this version was so much better! After some very positive feedback from my pre-teen focus group (some begging to see the 2nd novel as soon as possible), and a significantly smaller rewrite and editing, it was finally done. Done done. Off to the copy editor done.

It only took 7 years from the day I received the idea to the day I let it go.

Filed under behind the scenes, Brigitta of the White Forest, industry poop, novel adventures, writing life

Can I get a hey? a hip-hip-hooray? a WHEW! (Brigitta is on the loose)

At long last… no seriously…loooooong laaaaaast… I just handed (okay, I e-mailed) the FINAL DRAFT of my accidental novel Brigitta of the White Forest to my copy editor. It’s officially out of my hands.

Do you even know how unreal it was to let it go?

This story began in late 2002 when I was visiting my brother’s partner in her most-awesome store EARTH CENTRAL. A cavern of magical items, books, tarot cards, and piles of faerie-like clothing. I was tending her store and pondering something my EX-screenwriting agent had said to me after reading my 3rd dark, dysfunctional, indie dramedy.

Danika, could you please write something BIGGER?

Bigger I thought… something more mainstream… something with merchandising potential, perhaps… all of this stewing in my brain while being surrounded by FAERIES! 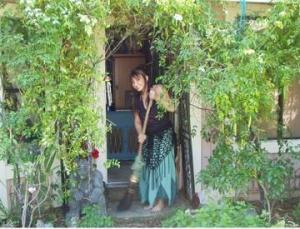 Lady Luna on her Doorstep

You can say inspired, kissed by a muse, or downloaded – but the idea for the story was simply suddenly there. I could picture the two faerie sisters in my mind. So, I let the story percolate, my usual mode of development for a new idea. My mind just plays with it, tosses it around, pokes at it, and asks it a few what if questions.

And then, fortune of fortunes, the next summer I was hired to work on set on the magnificent Sunshine Coast. If faeries live anywhere, they live near skookumchuck narrows on the Sunshine Coast. I knew it was the perfect opportunity to write the story. I made my goal to finish it by the end of the gig… four weeks.

I did just that and even met some fabulous hippies with an old VW van (painted with faeries, of course) and told them the whole story. My first audience.

That was when the screenplay Brigitta of the White Forest was born. Since I had created an entire world with its own rules, magic, flora, and fauna I decided before I wrote another draft I had to figure out how this world worked. I wrote a 25 page world book and glossary for my own reference and 4 more drafts of the screenplay over the next two years.

In 2005 I got a call from an agent in Vancouver who loved Brigitta and wanted to market the script. I was thrilled, of course.

But it was still not a novel. It wasn’t even an idea for a novel. It was a mainstream, big-budget, family film with merchandising potential. It was a SO THERE to my EX-agents who complained that i didn’t write BIG enough…

Filed under behind the scenes, Brigitta of the White Forest, novel adventures, screenwriting