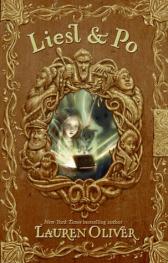 Liesl lives in a tiny attic bedroom, locked away by her cruel stepmother. Her only friends are the shadows and the mice, until one night a ghost appears from the darkness. It is Po, who comes from the Other Side. Both Liesl and Po are lonely, but together they are less alone.

That same night, an alchemist’s apprentice, Will, bungles an important delivery. He accidentally switches a box containing the most powerful magic in the world with one containing something decidedly less remarkable.

The box that was switched is actually the ashes of Liesl’s father, who has recently died. With Po’s help, Liesl runs away from home, determined to bury her father’s ashes near a tree at her childhood home. Little does she know she’s actually carrying the world’s most powerful magic instead – magic that took all the colour and sunlight and joy away from the world in order to create it.

Along the way, she joins forced with Will and they race to find the old house and bury her father before a host of evil adults catches up with them.

Those of you who know me know that it is tough for a lower middle grade book to capture my attention (although Kate DiCamillo does it every time). I am much more fond of upper middle grade, tween, and young adult stories.  After many readings and much consideration, I have come to appreciate and understand the difference.

In a nutshell, lower middle grade books have less character development, issues are more black and white, there is little grey area when it comes to good and bad, and there is often unrealistic behavior that comes across as “cartoonish.” I think of Disney movies where the “bad guys” are bumbling idiots and go out of their way to avenge themselves against clever children. Where ugly evil stepmothers lock step-children in attics.

For instance, in Liesl and Po, an old woman on the train hears Liesl talking to herself, decides she’s a nut job and needs to be arrested for the good of society, so she nags a police officer into disembarking the train with her and chases Liesl down over miles of foothills (never mind her luggage or her original destination). That’s the kind of thing I’m talking about with lower middle grade readers. Kids might think this is hysterical, but it’s generally not my cup of tea.

There was something quite endearing about this book, though. Something that tugged at my heart-strings. After reading the book I discovered that Oliver had written a very personal story in order to have closure after a friend’s death. Having lost several people in the past few years, I grew a new appreciation for the book and its allegories.

One of the things I loved most about the book were the descriptions of what it was like to be a spirit and merge with the universe. The metaphysical aspects might be a bit beyond the grasp of an 8-year-old, but they might be comforted on some level, in particular if they have lost a loved one. In any case, I thought the descriptions were absolutely lovely – for any book.

It (Po) had been across eons that stretched like deserts across the universe: places where time was as water in the Sahara – gone, drifting to dust. It had been into cold, black seas where souls huddled together, and into dark tunnels burned straight into the center of existence . . .

The “evil” characters are completely one-dimensional, but then there’s Mo (!) – if you’ve read this book you know why lumbering, simple-minded, big-hearted Mo is one of my favourite characters. Mo is the Lady Premiere’s guard, and to me he represents the persistent and ever-present love that exists in the world when the dark shadow of grief overcomes us.

To read my “Tips and Tropes of Middle Grade Fiction” CLICK HERE.

Filed under Middle Grade Mondays, on my bookshelf