One of my pet peeves as a reader (and movie goer) is characters that are too perfect. Who can relate to that? Humans are not perfect. We are messy. We carry a lot of baggage, have fears and secrets, do the right things for the wrong reason, the wrong things for the right reason. We sabotage ourselves, hurt the ones we love, and agonize over decisions.

Good people can do “bad” things. And it’s when our good* hero does something wrong due to fear or ignorance that brings about their own undeserved misfortune that we empathize most of all. This leaves the opportunity for our heroes to redeem themselves, which is ultimately satisfying. 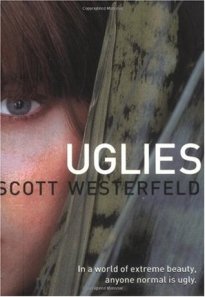 In the Uglies by Scott Westerfeld, the protagonist Tally struggles with doing the right thing under tremendous pressure, educated in a society controlled by propaganda, and ends up betraying everyone she cares about through her own actions. It makes me angry with her, but I still sympathize, and am moved later when she redeems herself through a great sacrifice. Ultimately, a satisfying emotional roller coaster ride for the reader.

On a subtler note, but just as emotionally satisfying, one of the most heart-breaking scenes in What’s Eating Gilbert Grape (the only movie I’ve ever liked better than the book, both written by Peter Hedges) is when Gilbert hits his younger, mentally disabled, brother. Throughout the whole story, Gilbert is constantly striving to be good and to support his dysfunctional family. He has a lot of pressure, for a teenager, to take care of them all. All the while we’re rooting for him to somehow escape the mess. He loves his brother, has taken care of him over the years, and threatens anyone who even jokes about doing him harm. But the tension builds up so beautifully in this story until Gilbert acts in a way he never thought himself capable, so that when he strikes his brother we actually feel sorry for Gilbert!

And btw, it doesn’t matter if you’re writing comedy or drama. Comedy is generally one undeserved misfortune after another!

Timed writing exercises, goodie! Set your timer for 7-10 minutes. Using any (or all) of the start lines below, allow yourself to develop your character’s messy bits through your writing. Just write as fast as you can. Don’t worry about complete sentences, run-on sentences, or proper grammar. (You know the drill! No stopping, no judging, no editing, no crossing out!)

My protagonist’s deepest fear is . . .

My protagonist’s fatal flaw stems from . . .

My protagonist doesn’t want his friends to know . . .

My protagonist feels guilty when . . .

My protagonist causes his/her own undeserved misfortune when . . .

In order to redeem himself/herself, my protagonist must . . .

Have a great weekend!